The neighborhood is named after José de Jesús Noé, the last Mexican alcalde (mayor) of Yerba Buena (present day San Francisco), who owned what is now Noe Valley as part of his Rancho San Miguel. Noé sold the land, later to be known as Noe Valley, to John Meirs Horner, a Mormon immigrant, in 1854. At this time the land was called Horner's Addition. The original Noé adobe house was located in the vicinity of the present day intersection of 23rd Street and Douglass Street. Along with nearby neighborhood Corona Heights, Noe Valley was the site of two quarries until 1914. [4] 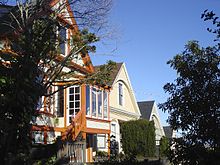 Noe Valley was primarily developed at the end of the 19th century and at the beginning of the 20th century, especially in the years just after the 1906 San Francisco earthquake. As a result, the neighborhood contains many examples of the "classic" Victorian andEdwardian residential architecture for which San Francisco is famous. As a working-class neighborhood, Noe Valley houses were built in rows, with some of the efficient, low-cost homes being more ornate than others, depending on the owner's taste and finances. Today, Noe Valley has one of the highest concentration of row houses in San Francisco, with streets having three to four and sometimes as many as a dozen on the same side. [5] However, few facades in such rows of houses remain unchanged since their creation in the late 19th and early 20th century.

Many Noe Valley streets were laid out and named by John Meirs Horner, who named Elizabeth Street after his wife and Jersey Street after the state where he was born. Most of Noe Valley is still called Horner's Addition for tax purposes by the city assessor's office. Present day 24th Street was named "Park Street," and 25th Street was named "Temple Street" to commemorate John Meirs Horner's Mormon faith.

St. Paul's Catholic Church, at Valley and Church streets, was the setting for the movie Sister Act.

Find a Home in Noe Valley

Data last updated: Jan 22, 2022 10:17:pm. Copyright: 2022. Listings on this page identified as belonging to another listing firm are based upon data obtained from the SFAR MLS, which data is copyrighted by the San Francisco Association of REALTORS®, but is not warranted.